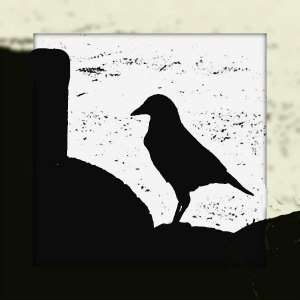 Angry bird most likely got a broken wing or something from somewhere.

They got some kind of issue there. They fell out of the nest or got booted out or never had a nest to begin with.

Maybe their momma bird didn't want them and pushed them away or they don't have a daddy or anyone else. They don't even know who they are or where they came from or where they should go. They are just so angry.

They tried to fly like the other birds, but they couldn't.   They tried so many times to fly.... but they just couldn't do it!!

So they shake their broken wing at fate and say: "see what you did to me, see how I hurt?" and they say outloud  "I hate you for it" only they are the one they are really talking to.

They just want to be gone really....to fly far away, but they can't cause their wings are broken. So their stuck and they can't figure it out.

They see the other birds laughing and flying around. But they are still so hurt, that they can't join in. They sit nearby maybe. They watch things going on maybe. They try to mimic. But when birds comes near them, they puff up with all they know.  Which is angry.

And nobody knows what to do with that.

So the other birds don't come near, or say hello because they know it's not a good thing, what this angry bird has going on inside of them.

But the angry bird doesn't see what the problem is.

One day, a brave little bird flies over and says hello... and the angry bird yells at the little bird to get lost!!  To go AWAY!!!

And the little bird frightened...does.

So what can you do with an angry bird?

This is a song my son made for me a few years back for Mother's Day... click here to enjoy!

Archangel Brigit (a mighty warrior angel and protectress of the good!) The Green Man – overseeing nature and its kingdom, and working your way through the forest (of your mind) no matter how dense the underbrush!! Representing cycles of birth, death and re-birth!

For removing old clinging heartaches that have left a bitter taste....don't let your beautiful heart go to waste!

For realigning with true “LOVE” regardless of your past experiences with it.

For the apocalyptic events around “love and loss” in your life that have caused you to become lost, hardened, indifferent, helpless or hateful. For the wounds received that you don’t know how to let go of... or that won’t let go of you. Be careful here…for the more you hold onto the hurt and pain of past transgressions against you, the more you become trapped by them. It’s a bittersweet symphony so to speak and will literally choke the love and life right from you. For hate, spite, bitterness, numbness and just plain not knowing how to get free even if you want to! For being resigned to your “fate” (doom) versus back on your path. For feeling like the only human alive in a world full of zombies (loner). For having no idea what real love is but wishing you did. For protection and release from old fears, negative people that just aren't good for you, and old painful stories that have left big wounds. We must unwind from the things that caused us heartache. We must remove ourselves from those things in order to be free. For cutting ties to whatever is holding you back. Whether we are the basher…or the bash-ee. Does it matter? For compassion and forgiveness of all parties involved so YOU can be free. I didn’t say it was easy…..but this essence will help!

Rose Quartz is the ultimate healer. The LOVE stone. It's for healthy love, honest, unconditional and freely given. That is what you can have. Imagine.